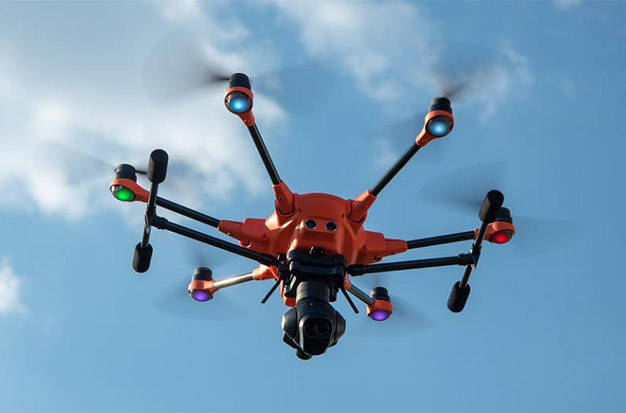 One industry innovation that is rapidly gaining traction is the use of drones in construction. A drone can perform a variety of site-related tasks more quickly and accurately than traditional methods while spending a lot less money. What applications are there for drones in construction, then? This post will explain the specifics if you keep reading.

Even though there are many different kinds of drones, the majority are used for commercial purposes in construction. Some models have fixed wings, while others have rotating blades. Their usage and design stand out as the main differences between them.

Fixed-wing drones, which resemble small airplanes, can fly at greater altitudes and follow predetermined paths. They are effective for pre-construction procedures like topographic mapping and extensive area surveys because of this. However, because they can only fly forward, they aren’t very effective in places with lots of obstacles or confined spaces.

In comparison to fixed-wing drones, rotary drones are simpler to control due to their ability to hover and maintain stability. These drones make an excellent choice for aerial inspections, structural scans, photography, and close-range surveillance.

Drones are equipped with a variety of features, such as cameras, GPS systems, thermal sensors, and infrared sensors, to aid in the collection of important data on construction sites. Users can analyze, interpret, and organize the data collected by using drone software to send the information they’ve gathered to a computer. The efficiency of project management is increased by these features, which also enable more thorough inspections.

Even though using drones in construction isn’t a new concept, businesses are now implementing them more quickly than ever. Drones have proven to be extremely useful in the field, whether they are used to survey land or track equipment.

Additionally, drones directly benefit the lifecycle of construction. Their abilities enable them to reduce expenses, time, risk, and labor while enhancing productivity, accuracy, and communication. When working on a construction project, all these things increase confidence and certainty.

Drones are revolutionizing the construction industry and altering how projects are managed even as their effects are still being felt in the sector. It is safe to say that the commercial drone is here to stay as long as the technology can get past federal aviation and zoning restrictions. Take a look at the infographic below for more details.

Uses Of Drones In Construction

Building surveyors are aware that in order to assess any flaws and determine the condition of the roof, the majority of building surveys necessitate roof visibility. Typically, gaining access to a roof requires the construction of a scaffold, the use of a cherry picker, or the use of ladders. The survey could be completed more quickly, more cheaply, and with fewer health and safety hazards if a small drone were used.

It can be hazardous and challenging to conduct inspections on a busy construction site. Saving time and lowering risks to health and safety are two benefits of using a drone to visually inspect high-risk areas. The security of the site offices can be used to record drone footage, which can then be sent in HD to project stakeholders.

To track site progress in relation to the project schedule, construction progress reports are frequently created monthly. These reports frequently include multiple photos taken by the surveyor or contract administrator of various sites. A routine drone flight can offer a quicker method of documenting and visualizing project progress. Project stakeholders can gain a better understanding of the progress that has been made through a series of aerial photographs and HD videos.

High structures like bridges, towers, roofs, and scaffolding can require expensive access arrangements, as well as site personnel working at height, to conduct planned or reactive maintenance inspections. By transmitting HD real-time footage to the engineer or surveyor on the ground, drones can offer a quicker and simpler way to conduct these inspections.

With the advent of social media, compelling photography is playing a bigger role in how construction companies advertise their services. A project or structure can be interestingly portrayed in 4K HD video and photos taken from unusual perspectives, which is perfect for marketing materials. It can be a helpful tool, in particular, for real estate agents who want to display eye-catching images of a building or property they are attempting to sell.

For surveyors to laser scan high areas of a building, access to a suitable location can be difficult, which results in the point cloud being returned without important data. Input for point cloud scans for use in Building Information Models (BIM) can be completed by using laser scanning from drones, which has become a recognized technique for capturing the fine detail of topography, buildings, and cityscapes.

Certain Professionals May Need To Obtain Real-Time Updates About What Is Happening When Performing High-Risk Work On Site. A Drone Camera Can Stream Hd Video In Real Time To The Project Team Or Other Stakeholders By Utilizing First Person View (Fpv) Technology. With The Aid Of Virtual Reality (Vr) Glasses, This Experience Can Be Improved.

Construction sites constantly change, and activities there don’t always follow the schedule of work outlined in the contract documents. Drones are able to give a real-time update of what is happening and a good overview of any potential problems, such as moving machinery, vehicles, cranes, and other objects.

When a pre-written talk or pre-recorded video is used as part of the site induction process, it can be tedious at times. Site managers can demonstrate moving vehicles, moving cranes, active excavation areas, and other hazards to new site workers in real-time by using a drone to fly over the site.

Similar to laser scanning, drones can be used to record aerial thermal images that can be analyzed to find potential cold or hot spots in structures that house electrical components. When attempting to locate and correct building flaws, this can provide engineers and surveyors with crucial information.

What Are The Construction Drones’ Prices?

Construction consultancies and high-profile businesses are closely monitoring the effect that drones are having on costs.

For instance, land-surveillance techniques are being observed and seem to be quickly being replaced by drone technology for survey and inspection purposes because they are proving to be cost-effective and present little risk to workers and surveyors. Construction behemoths Balfour Beatty have been testing drone technology to inspect bridges in West Sussex since 2017. Savings of about £8,000 have been noted in the trial so far when compared to conventional inspections.

But another advantage of using drones is that it saves time since time is money in all sectors of the economy, including construction. In the Goldman Sachs report, it is stated that “drones can usually shorten a long process by producing 3D renderings of a property” and “UAVs may become a key tool for surveyors by allowing improved measurement accuracy and faster work.” These statements make it abundantly clear that using drones has significant advantages for businesses.

The cost of time is obviously a factor, and accuracy is a key factor. Aside from increasing efficiency (cost of time), getting data and measurements right the first time also helps avoid making mistakes and their associated time and money-related costs.

Although drones in construction are not new, businesses are implementing them more quickly than ever. Other aspects of drone technology are also developing. Future autonomous vehicles may be guided and controlled by drones. Similar technology could help with the transportation of building materials and the control of construction vehicles. Systems that pair drones with self-driving cars and delivery trucks have been tested by Amazon and other manufacturers.

With their current capabilities, drones can reduce labor, costs, and risks while enhancing workflow, accuracy, and efficiency. The construction life cycle will only become more efficient if these technologies are later widely adopted. Though their effects on the sector are still being felt, drones are already revolutionizing it and altering the way construction projects are managed. 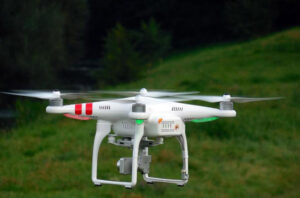 Previous post Can You Bring A Drone On A Plane?

Next post Can I Shoot Down A Drone? Is It Legal?
Drone Beginners Drones at Work
Posted By Lorraine Winnie