The DJI FPV drone is one of the most fun drones on the market and today we will go into DJI FPV battery life, to help you extend the lifetime of DJI FPV.

The 2000 mAh 6s LiPo battery used in DJI FPV devices has a maximum charging voltage of 25.2 volts. Use the DJI charging hub or the dedicated DJI power supply to charge it. It has a maximum flight duration of 20 minutes, but as with any FPV drone, aggressive flying shortens the flight duration.

This article will teach you everything you need to know about DJI FPV batteries and give you advice on how to keep your battery in top shape for hours of enjoyable flying.

What Kind of Battery is the DJI FPV Battery?

2000 mAh 6s LiPo battery is used in DJI FPV devices. It is fundamentally similar to the majority of other drone batteries. There are some important differences to be aware of because DJI has incorporated some intelligent features.

A lithium-polymer battery is what is meant by the term “LiPo.” As they can be produced in a variety of sizes and shapes, lipo batteries are ideal for use with drones and other small electronics because they are lightweight. In contrast to some other batteries on the market, they can also withstand considerable abuse without exploding. Lipo batteries, however, can overcharge and ignite if not charged correctly. To find out more about how to maintain and properly care for your LiPo battery, read our article on the subject.

It is very unlikely that the DJI Intelligent Flight Battery will catch fire because it was designed with a lot of technology built into it to help avoid many of the issues that come with regular LiPo batteries. As with all drone batteries, simply follow the directions in the manual to avoid any issues.

If you’re wondering what 6s stands for, it’s the number of cells in the DJI FPV battery. A 6s battery can store up to 25.2 volts because the usable voltage range for a LiPo cell is between 3.2 and 4.2 volts. Your DJI battery will be 25.2 volts fully charged when you use the included charger to charge it.

The great thing about the DJI system is that it will automatically stop charging when your battery reaches the necessary voltage, so you do not have to worry about overcharging your DJI FPV battery as you would with many other FPV batteries.

How Do I Charge a DJI FPV Battery?

Use the DJI charger that comes with the battery or a DJI charging hub to recharge your DJI intelligent flight battery.

You’ll quickly realize that having extra batteries is worthwhile because FPV is addictive and you’ll want to fly more than one battery when you’re out flying. You can power the hub with the same power cord that came with your drone charger, and the process for charging multiple batteries at once will be the same.

When you plug in the hub, it will detect how much juice is still in each battery and start charging the one with the most juice first. According to their level of power, the others will then proceed. You can use them right away without having to wait for them to all be fully charged. Utilize the fully charged one, and the others will keep charging.

How Long Does It Take to Charge a DJI FPV Battery?

We’re all eager to take off as soon as we can. A DJI FPV battery typically needs 50 to 55 minutes to fully charge from zero. To monitor how fully charged your battery is, pay attention to the LEDs. The battery is fully charged when all of the LEDs are off. Before taking to the air, make sure your batteries are completely charged.

The best procedure is to fully charge your batteries just before using them as opposed to attempting to do so right away after use. First, a battery should never be charged while it is still hot; instead, you should wait until it has cooled down before charging it. The second reason is that the battery will start to self-discharge after being inactive for a day, necessitating two charges (which puts more strain on the battery) if you aren’t flying again the following day.

Can I Use Other Batteries on a DJI FPV Drone?

You probably already have some LiPo batteries lying around from your other drones if you’re into FPV. You might be wondering if you can simply use another 6s LiPo in your DJI FPV drone. The answer to that is: no! A DJI intelligent battery must be plugged into the drone before it can take off, according to DJI’s design. You must use the exclusive DJI intelligent flight battery with your DJI FPV drone.

Because of the way the DJI FPV drone is constructed and the way the intelligent flight battery interacts with the drone’s operating system, it would be risky to attempt to use different batteries in the device.

How Do I Remove and Install a DJI FPV Drone Battery?

Press the battery buckles on the sides to release the battery from its position on the drone after first disconnecting the power port.

Generally speaking, you should also keep an eye out for a few issues that are common and can harm battery health. If any of the following occurs, know that it is time to replace the battery:

Given that the DJI FPV drone lands on the back of the battery, a good landing pad ought to be able to cushion some impacts to the battery.

Your DJI FPV drone will be a lot of fun, and now you should understand everything you need to know about the DJI FPV battery.

One of your FPV drone battery’s biggest enemies is over-discharging or reaching 0%, it’s important to note. In order to prolong the life of your drone, DJI typically suggests landing it when the battery level is 15% or higher. However, for FPV flights, you might want to start RTH when the battery level is between 20 and 25 percent, depending on how far you are from the launch site.

As was already stated, use the proper battery for the drone, charge it properly, install it properly, and be familiar with how it operates. All of these tips will be useful to you as you fly your DJI FPV drone outside. Happy flying!

How Long Do FPV Batteries Last?

How Many Miles Can the DJI FPV Go?

Can I Fly My DJI FPV Drone at Night?

Alongside a drone that meets FAA’s requirements for safe flight, when it comes to night-time flying, you’ll also need to have anti-collision lighting that’s visible from three miles away. 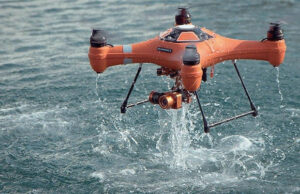