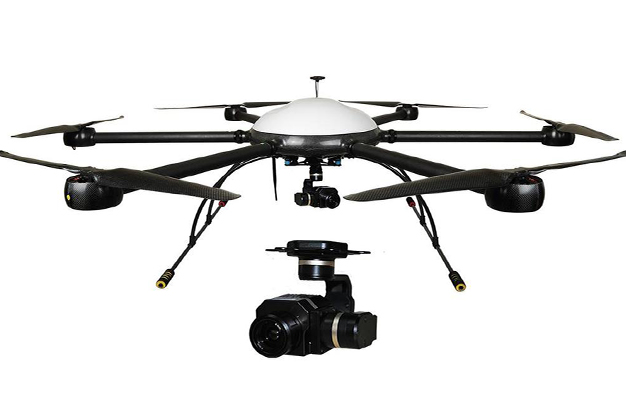 Unmanned drones are no longer just a novelty item for collectors, nor are they only available with standard, low-resolution optical cameras. There are many drones on the market today that can be fitted with high-precision, high-quality thermal cameras, which have many applications in both the public and private sectors.

Let’s first talk about what thermal cameras are and how they are useful in the modern world before we discuss the various applications for drone thermal cameras.

How Do Thermal Cameras Work?

Similar to a regular camera, a thermal or thermographic camera creates a film or digital image of what it captures through the lens. The difference is that thermal cameras create their images using infrared radiation (or heat), not visible light. Because thermal cameras are made to find and show heat zones that are invisible to the naked eye, the resulting image is much less realistic than what we see in reality.

The thermal scale of the cameras can be constrained and adjusted to decrease or increase the color contrast for more accurate temperature analyses depending on the user and application.

The first thermal cameras were a component of military gear that was used to identify and target enemies during the night or across smoke-filled battlefields. As thermal imaging solutions for a variety of demanding industrial, enterprise, security, and military applications, thermal cameras are now being developed into handheld and mountable devices.

What Are Thermal Cameras On Drones?

The typical thermal cameras that are mobile and portable as well as those mounted on permanent structures for continuous coverage and surveillance were excellent first steps in the use of thermal imaging equipment. A logical next step seemed to be to integrate thermal cameras into drones as drone technology developed and smaller, less expensive commercial drones were produced.

By fusing their top-tier aviation systems and ground-breaking infrared imaging innovations, DJI and FLIR Systems worked together in 2015 to develop the DJI Zenmuse XT, one of the first drone thermal imaging cameras. Drone technology is now much more common in many industries thanks to the addition of thermal cameras to high-end models.

Since then, FLIR has created new thermal camera models to meet the demands of various industries. Thanks to drone companies like Yuneec, Autel Robotics, and Parrot, local government organizations, large and small private businesses, and even common households can now use thermal imaging to improve their physical security, identify areas in their buildings and infrastructure that need immediate repair or are likely to need repair in the future and provide additional services in a variety of industries and applications.

Inspections of solar panel fields, especially those involving larger installations, can take a while. In contrast, a drone can inspect a large solar field in much less time and for less money than hiring a manned aircraft equipped with thermal sensors. A drone can monitor solar cell defects and take precise measurements of other extremely important problems at relatively regular intervals using its higher precision capabilities.

Electrical facilities, such as substations, power lines, and power distribution systems, can be monitored and examined from a safe distance for overheating spots, damaged components, and faulty connections without the need for expensive equipment or putting lives in danger. This is possible thanks to thermal cameras and certified drone operators.

By reducing the number of engineers needed to a few drone pilots and flight controllers with built-in or remote displays to complete the operation—even in difficult-to-reach places—drones save a significant amount of time and money.

However, having them on drones makes the job much easier, faster, and less expensive. Thermal cameras are particularly useful in determining the extent of deterioration on roads and bridges or evaluating their general health. They also eliminate the requirement for inspectors to endanger their lives when inspecting larger land and water bridges, which require inspectors to hang from a height of several hundred feet above the water or scale heights of over a hundred feet.

Drone thermal imaging is useful for inspecting the exteriors of homes and businesses, as one might anticipate. It works perfectly for finding leaks, pinpointing the root of power inefficiency, and figuring out external issues. When these problems are found early on in homes, homeowners can save a lot of money on energy and maintenance costs.

If the specific drone can fly at a high enough altitude, subject to technical and legal limitations, to get a bird’s-eye view of the entire structure or area, it can also significantly shorten the time it takes to examine large structures and areas. A problem area can be located by the drone operator, who can then direct the drone closer for more accurate imaging.

Because the thermal cameras that are available for drones can efficiently deliver precise temperature readings, which can be used to identify the presence of crop pests and diseases, measure acidity, and determine other environmental factors that can adversely affect production, drones are becoming more and more common in agriculture. Thermal drones are also used by cattle ranchers to track down any cows that have strayed from the herd and to keep track of their other livestock.

There are two particular areas of an application under the oil and gas category: refinery and pipeline inspection. Thermal imaging drones can easily measure leaks from a safe distance and are outfitted with optical gas imaging (OGI) sensors for refinery inspections. For pipeline inspections, however, fixed-wing drones with better operational performance are used.

Both uses are significantly less expensive than the conventional use of manned aircraft. In addition to taking high-resolution pictures, many thermal imaging drones can also stitch a number of pictures together to create an orthomosaic map that offers both a general overview and more specific information that reveals trouble spots and the lifespan of particular components for analysis.

Public safety now has access to powerful drone technology. Unmanned aircraft systems (UAS) are used to help save lives in a variety of situations, including search and rescue operations, law enforcement crime scenes, and emergency response to natural disasters like fires or other hazardous situations. The use of thermal imaging sensors in drones is one of the most significant advancements made for this purpose.  UAS equipped with thermal cameras can be used at night when temperatures are low enough for the drone’s sensor to pick up infrared radiation.  They can also be used in circumstances where it is risky for personnel to be present. In fire situations, such as wildfires and other disasters, thermal imaging drones are incredibly helpful because they can see through smoke and locate people who may have become trapped or lost.  By obtaining a clear picture of the scene, they can also assist in locating hazardous material leaks at chemical plants or gas stations.

By locating missing people or stranded hikers, hunters, skiers, or other victims lost in the great outdoors, thermal imaging drones are used to aid in search and rescue operations and save lives.  Through the use of an infrared camera, the drones can fly overhead day or night and conduct a thorough search for heat signals that could indicate survivors.

Drones with thermal cameras are a major factor in how public safety organizations using drones are able to save lives and protect property.

Any of the professional-grade drone thermal cameras listed below are currently in use in a variety of industries, so if you’re considering buying a thermal imaging system, you might want to give them a look.

For those who want top-notch thermal cameras for their powerful drones, DJI and FLIR have developed the Zenmuse XT2. It expands on the groundbreaking Zenmuse XT’s success, which only means it can deliver more thorough and accurate results.

The original XT thermal camera continues to be one of the most dependable and tried-and-true models available to this rapidly expanding market, despite the release of the Zenmuse XT2 and other higher-quality drone thermal cameras.

It provides the two industry-standard thermal image resolutions at various speeds to adequately meet the needs of the agricultural, industrial, government, military, and private business sectors in terms of general thermal imaging. Wide-angle lenses of all types are compatible with it, and it has a mechanical gimbal with 3-axis stabilization for more supple videos and crisper images.

Of FLIR’s most well-liked drone thermal cameras, the Vue Pro R is one. It is available in four models, each of which combines a lower resolution (336×256) and a higher resolution (640×512) model with a slower (30Hz) or faster (60Hz) frame rate.

The fact that it can work with a wide variety of lenses and be easily matched up with the MavLink or Pulse Width Modulation (PWM) controls from your drone makes it even more ideal for practically any drone thermal imaging application and efficient flights.

Although thermal imaging is nothing new, it becomes a very potent tool when it is combined with a drone.