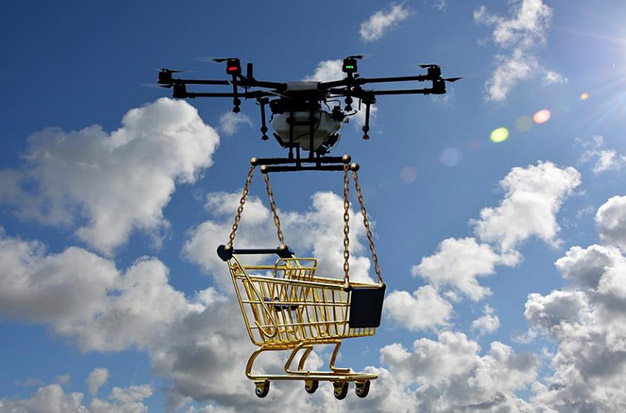 Drones, also known as unmanned aircraft systems, are increasingly used in contemporary logistics operations. Drugs, packages, groceries, food, and other homecare items are all delivered by delivery drones. Given their accuracy, environmentally friendly operations, quicker delivery times, and lower operational costs compared to traditional delivery channels, these drone delivery operations are becoming increasingly important in last-mile delivery. [i]Analysts estimate that a drone delivery service would have 40% to 70% lower operating expenses than a traditional vehicle delivery service. Further accelerating the need for alternative, secure, and contactless delivery models is the COVID-19 pandemic. The need for drone delivery services has increased globally as a result of this.

Drone Delivery: What Is It?

Consumer and business drone adoption is accelerating, and the retail sector is setting the pace. For retailers, drones may be used for a variety of purposes, but drone delivery (which is exactly what it sounds like: products delivered by drone) is the most well-known and readily apparent.

Despite the fact that the advantages of delivery drones may be more immediately apparent, they do have some drawbacks as well.

To deliver the pizzas, a pilot and a team of drone experts used Flirtey’s DRU Drone’s GPS navigation system.

Drone delivery of pizza is one thing, but when the biggest e-commerce company in the world considers using unmanned aerial vehicles (UAVs) to complete orders, that’s a whole other ballgame.

Regarding 2019 at Amazon: The e-commerce behemoth announced at the MARS conference that it will soon begin offering Prime Air, a drone delivery service.” By far surpassing its two-day Prime shipping and two-hour Prime Now deliveries, Amazon plans to deliver customers’ orders via its Prime Air delivery program in just 30 minutes.

In the Prime Air delivery program, GPS-guided autonomous drones are used. Drone delivery has the potential to give Amazon an advantage over competing logistics companies because last mile delivery is the most costly and time-consuming step in the shipping process.

The wing is a drone delivery service run by Google parent Alphabet in collaboration with FedEx and Walgreens. It delivers specific FedEx packages as well as health and wellness items from Walgreens, such as over-the-counter medications.

Drones from Wing deliver packages weighing two to three pounds right to customers’ doorsteps. Since the drones are powered entirely by electricity, Alphabet can benefit from Wing’s increased speed and cost-saving capabilities while also boasting about their fuel efficiency.

UPS Flight Forward was given permission by the Federal Aviation Administration (FAA) to become the first drone service to ever fly as a commercial airline in 2019. Although the drone service can only operate in suburban and rural areas, Business Insider Intelligence reported that it has complete autonomy over the size and scope of its drone operations.

UPS later teamed up with CVS Pharmacy – indicating that the company is looking to focus its initial drone efforts on medical product delivery,

For the second consecutive year, Walmart was on track to file more drone patents in 2019 than Amazon. Due to its vast network of US stores and the relatively short range of drones—about 15 miles—Walmart is well-positioned to dominate the commercial drone market.

It is inevitable that delivery drones and drone technology will be used. Soon, a variety of industries will use drone technology to innovate their respective business sectors, such as surveillance, research, last-mile delivery, etc. Since 2005, e-commerce behemoths have been in charge of the research, development, and patenting of drone technology. They remain committed to this market and are concentrated on lowering last-mile delivery operating costs, speeding up delivery, and fusing drone technology with mobile phone applications to enhance user experiences. Drone delivery services will only expand in the upcoming years, and businesses will need to continue investing in drone delivery initiatives and technological advancements before realizing operational growth and financial advantages.

Although there has been a lot of progress in drone delivery, we think that three catalysts will ultimately determine the direction of the industry.

In the end, the regulatory environment will decide the size and scope of drone delivery operations. The kinds of operations that are permitted are determined by regulations, which also set limits on the airspace, times of day, and weather conditions that must be present for flight. Costs may be significantly impacted by each of these variables. The operator-drone ratio, for instance, is one of the major cost drivers, so regulations may, for example, mandate that each drone have its own operator or permit a single operator to control a dozen or more drones. Drone airworthiness requirements are determined by regulations, and following the rules could potentially result in higher costs and a delay in at-scale operations.

Drone delivery needs to win the public’s confidence and acceptance, and the early signs are promising. In a survey we conducted of more than 4,500 people in six countries, the majority of respondents expressed a very positive opinion of drone delivery.2 If drone delivery was available today, nearly 60% of respondents said they would use it, while only 16% said they would not use it. This results in a ratio of 3.5 adapters for every non-adopter. (The remaining 27% were undecided.) Various variables, such as population density, geographic location, and regional weather, are likely to affect adoption differently across neighborhoods.

If all other factors are equal, consumers will favor deliveries with the lowest cost. This could pose some difficulties because other cutting-edge delivery options, such as ground robots, autonomous vehicles, and electric cars, will continue to become more affordable as they develop.

The drone delivery sector is at a pivotal point. Although volume has increased significantly recently, the future’s direction is still unclear. Whether or not the sector is able to disrupt global logistics will depend on regulations, consumer acceptance, and cost, as well as whether it is able to expand beyond niche applications.

So is drone delivery ready to take off? In short, yes. The healthcare sector is best positioned to reap the benefits of drone delivery services in the short term. The drone delivery market has its sights set on reducing problems with last-mile delivery.

Due to the FAA’s restriction on drone operators’ ability to carry cargo weighing more than 55 pounds, small package sizes of prescription and medical deliveries are ideal for drone delivery services.

And tech giants like Walmart and Alphabet might overtake them in the race for dominance in the commercial drone market if they don’t start making an effort to collaborate with big retailers. 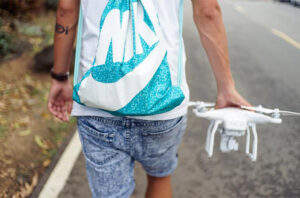 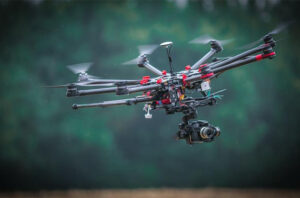