Skip to the content
Drones FAQs
Posted By admin

In short, the answer is yes they can, however you’ll need to check with your local laws to find out if you are allowed to fly it at night.
Some drones are equipped with lights so that you can monitor its whereabouts and some even come equipped with night vision cameras.

Infrared Imaging Company FLIR systems recently teamed up with drone manufacturer DJI to create a new line of UAV’s with thermal imaging capabilities. They haven’t been released to the public as yet, but even when they are, they won’t come cheap.

This kind of technology will be of keen interest of the military. Night vison drones that have the flexibility and manoeuvrability to infiltrate secured areas could prove a valuable resource in recognisance. This technology has benefits for other fields also such as the sciences. Drones equipped with bight vision and thermal imaging capabilities could be utilised to search and monitor elusive nocturnal animals for instance.

Depending on where you live there may be restriction regarding flying at night.
For instance in Australia and Japan it is against the law to operate a drone at night. Ensure you check your local laws for restrictions before flying your drone at night.

If you’ve checked your local laws and there’s nothing prohibiting you from flying your drone at night then get out there and have some fun. Use your night vision camera to take photos and videos of nocturnal animals or scenic views of city lights. You will need to be more conscientious of your surroundings to avoid crashing into trees, buildings or other obstacles that could be hard to spot in the dark.

Drones flying at night have been also attributed to some suspected UFO sightings. As drones become more prevalent it is easy to see how some may be mistaken for UFO’s. After all if you see something in the sky and you don’t know what it is, by definition it’s unidentified. Some industrious drone operators have deliberately set up hoax situations utilising their drone and some out of focus video recording in order to get their 15 mins of fame on YouTube.

Other ‘UFO’ sightings have been genuine people that thought they saw something but it was later discovered that drones were being flown in the area at the time and it was a simple mistake in identifying the drone.
Sorry folks, but if there’s an unmanned craft flying outside your bedroom window at night it’s probably not being controlled by an alien. 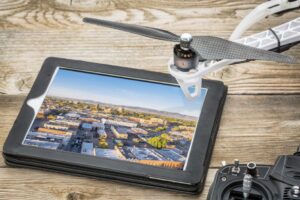